EVRY trades with the ticker code “EVRY” on the OSE, and the share has been included in the Oslo Stock Exchange Benchmark Index since 1 December 2017. As EVRY operates in the Nordic IT software and services segment, it has from the same date been included in the OSE Software and Services Index and in the OSE Information Technology Index. As one of the largest listed IT companies in Norway, EVRY is also included in other indices on the Oslo stock exchange, such as the OSE All Share Index, the OSE Mutual Fund Index and the OSE Mid Cap Index.

In 2018 EVRY’s share price rose by 1.5 percent, while its share price rose by 5.5 percent when adjusted for the dividend of NOK 1.25 per share. In contrast, the Oslo Stock Exchange Benchmark Index (OSEBX) fell by 1.9 percent in 2018, while the OSE Information Technology Index (OSE45GI) and the OSE Software and Services Index (OSE4510GI) fell by 20.0 percent and 4.1 percent respectively over the same period.

Lyngen Holdco S.A.R.L., a company indirectly controlled by private equity funds advised by Apax Partners LLP, was the largest shareholder in EVRY at the end of 2018 with a holding of 201 410 067 shares, which is equivalent to 54.3 percent of the total issued share capital in the company. Funds controlled and managed by Polygon Global Partners LLP represent the second largest shareholder, albeit with a much smaller percentage holding, while Folketrygdfondet (the Government Pension Fund Norway) is the third largest shareholder. As of 31 December 2018, EVRY’s executive management team controlled 0.71 percent of the shares in EVRY.

Source: Oslo Børs, Euroland, EVRY ASA
*between IPO on 21 June 2017 and year-end 2017
** Volume data from all trades including official trades and others

Due to the significant shareholdings held by EVRY’s two major shareholders, Lyngen Holdco S.A.R.L. and funds controlled and managed by Polygon Global Partners LLP (both shareholders prior to the IPO), only a relatively small proportion of EVRY shares are available for trading on a day-to-day basis, and trading volumes were relatively low in 2018. The number of shares traded in the period between 2 January 2018 and 28 December 2018 was 51.0 million, which is equivalent to 13.7 percent of the total outstanding shares in the company. 205 000 shares were traded on average each day, equivalent to 0.1 percent of the issued shares.

At the end of 2018, the EVRY share was covered by nine financial analysts, five of whom are based in Norway/the Nordics. EVRY is committed to providing relevant and complete information and to ensuring that all analysts are always treated on an equal basis. Day-to-day contact with investors and analysts is handled by EVRY’s Investor Relations department.

EVRY intends to pay dividends based on a pay-out ratio of around 60 percent of EVRY’s Adjusted Net Income (as defined on page 74 of this Annual Report). The proposal to pay a dividend in any year is further subject to any restrictions under the Company's borrowing arrangements and/ or other contractual arrangements in place at the time. Share buy-backs and/or extraordinary dividends are evaluated on a case by case basis and need to be approved by the company’s Board of Directors and the General Meeting/Extraordinary General Meeting. There can be no assurance that a dividend will be proposed or declared in any given year. If a dividend is proposed or declared, there can be no assurance that the dividend amount will be as indicated above.

EVRY’s Board will propose to the Annual General Meeting the payment of a dividend for 2018 of NOK 1.75 per share, which represents 61 percent of 2018 Adjusted Net Income. The divided proposed for 2018 represents a total payment of NOK 648.9 million on the basis of the number of shares outstanding at 31 December 2018.

The Board of Directors of EVRY ASA resolved to initiate a share buy-back program based on the authorisation to acquire treasury shares granted by the company's Annual General Meeting on 3 May 2018.

The Board resolved to initiate an acquisition by the Company of up to 2 500 000 shares under the share buy-back program, for the purposes of acquiring treasury shares which may be used to fulfill the Company's obligations under its incentive programs. The shares shall be purchased as ordinary market trades over the stock exchange.

Over the course of the year, EVRY completed the share buy-back programme representing a total of 1 501 744 shares corresponding to 0.4 percent of shares issued at year-end.

For additional information regarding the scope of the authorisation granted to the Board by the Company's General Meeting, please refer to the minutes of the Company’s Annual General Meeting held on 3 May 2018 (available on www.evry.com).

EVRY is committed to providing the financial markets with precise, relevant, timely and consistent information. EVRY has introduced an investor relations policy in accordance with the > Oslo Børs Code of Practice for IR of 1 March 2017. The purpose of EVRY’s IR policy is to ensure that the company complies with all official rules and regulations that apply to financial reporting and communication in the Norwegian financial market, and that it meets market participants’ expectation to be provided with information on a timely and equal basis. EVRY live-streams its quarterly and annual results presentations, which are held at its headquarters in Fornebu, Oslo, Norway.

EVRY is committed to open dialogue with market participants, including shareholders, investors and analysts. All information that may be important and relevant for capital markets participants is provided in the form of releases published through Oslo Børs’ NewsWeb publication service, the media and/or press releases.

EVRY intends to publish and present its results in 2019 on the following dates:

EVRY’s presentations will take place at EVRY's headquarters in Fornebu and over webcast and will start at 08:00 CET. The quarterly reports and presentation materials will be made available via the Oslo stock exchange (www.oslobors.no/www.newsweb.no) and on the company’s website (www.evry.com) at or around 07:00 CET on the day of release. Please see our website for further details and for any updates.

EVRY hosted a capital markets day at its headquarters in Fornebu on 27 November 2018 primarily for analysts and investors. EVRY has come a long way since the last capital markets it held day four years ago by following its business plan, and the company is now positioned to create business value through a customer-centric approach.

Shareholding distribution by geography at 31 December 2017 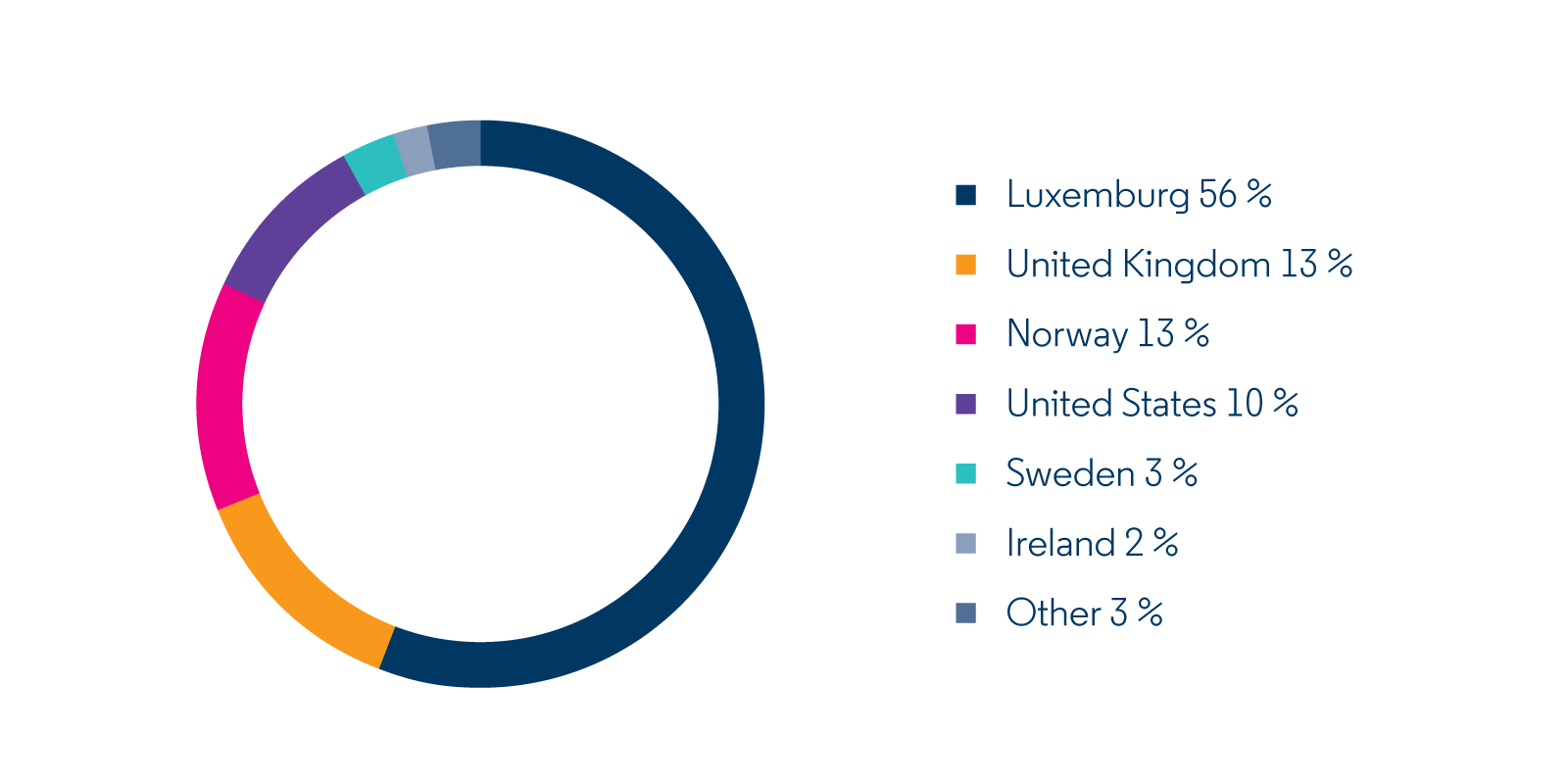