In the summer of 2018 EVRY’s Innovation Hub was tasked with looking at whether better use could be made of the company’s APIs. In October, EVRY launched “API Exchange”, a project to develop a public marketplace for APIs.

In practice, an Application Programming Interface (API) is an interface in a piece of software that enables specific aspects of it to be used by another piece of software. EVRY has developed a large number of APIs across the company’s industry segments and services. There is a desire to use the company’s expertise in quality control and data accessibility to simplify and increase the value of EVRY’s integrations in collaboration with customers and partners. APIs have a central role to play in this regard.

In the summer of 2018 a group of eight interns in EVRY’s Innovation Hub was given the challenge of investigating the options for how the company could make better use of its APIs. The students developed a concept and a prototype for how EVRY, its customers and others could make their own and other providers’ APIs more easily accessible and usable.

“The different APIs function as building blocks that you can use to put together the solution you want. Gathering together and offering all EVRY’s APIs through standardised interfaces, with proper documentation, login and access control will be very useful for all parties.”

An “app store” for APIs

In October 2018, EVRY set up a broad-based team consisting of recently employed ex-interns and experienced employees in the form of a technical architect, a senior developer and a business developer working together. Three students from the Norwegian University of Science and Technology, who work at EVRY on a part-time basis, were also part of the team. On the basis of the prototype, the team are working on a cloud-based marketplace for APIs that they named “API Exchange”. The project team collaborates with a range of units internally at EVRY as well as with numerous external organisations. The ambition is that EVRY, its customers and others can make their APIs available via the marketplace. The more APIs that are added to the solution by EVRY and others, the better it will become. The portal will make it much easier to make use of APIs and connect different solutions together, which in turn helps create better end-user services. 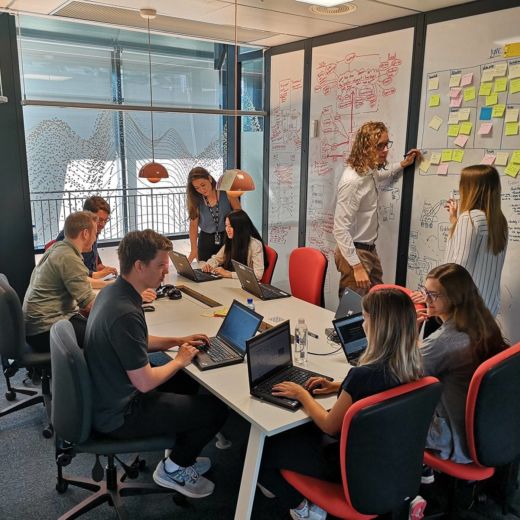 Work is now underway on how EVRY’s services could be made available to users. An example is how APIs for SMS messages and the Norwegian National Register, which is accessed via EVRY’s Infotorg solution, could be made available. This could, for instance, give Norway’s municipalities the opportunity to find the segment of the population they wish to communicate with and send them personalised SMS messages. Information that today takes a week to communicate by post will in the future be distributed in a matter of minutes.